Drug and Alcohol Abuse in Alaska

The greatest contributing factor to violent crimes—including domestic violence and sexual assault—is drug and alcohol abuse. Property crimes, such as burglary and theft, often have a drug and alcohol abuse nexus. It is also widely recognized that many of the accidental deaths that occur in Alaska are related to alcohol use. This is especially true in the western regions of the state and is evident in the statistics entered into the Alaska State Trooper case management systems.

Alaska has the highest number of violent crimes in USA. Read details here…

Alcohol, heroin, methamphetamine, cocaine, prescription drugs, and marijuana continue to be the primary substances abused. Synthetic cannabinoids appear to have impacted some communities while other areas of the state do not appear to have an appetite for them. Trends of poly-drug use (the use of two or more psychoactive drugs in combination to achieve a particular effect) are being widely reported, in particular the combination of heroin and methamphetamine.

Alaska’s criminal justice professionals recognize that alcohol is the primarily abused substance in Alaska. Alcohol is often involved in many violent, suicidal, and accidental deaths, particularly in rural areas of the state. Currently, 109 communities have voted in favor of local option statutes prohibiting the sale, importation, and/or possession of all alcohol. Because alcohol remains legal in many areas of Alaska, bootlegging activities continue to be problematic in the local option communities.

The economics of the illegal sales of alcohol is staggering. The initial purchase for the bootlegger 7 involves a minimal cash investment yields a significant cash return. For example, a bootlegger can legally purchase a 750-milliliter bottle of alcohol for $10 or less in an urban liquor store. The same bottle of alcohol in Bethel, Kotzebue, or Barrow, where the sale of alcohol is illegal, may sell for $50. In more remote communities where alcohol is banned, alcohol can easily sell for $150 to over $300 per bottle, depending on supply and demand.

Cocaine continues to be a widely used and is a lucrative drug for sale in Alaska. Cocaine is available in most areas of the state and is seen in powder form. Crack cocaine is more common in the major urban areas such as Anchorage and Fairbanks. Cocaine is brought into Alaska concealed on passengers or in luggage, through ports of entry, such as the Ted Stevens Anchorage International Airport. It is also shipped via the U.S. Postal Service or commercial parcel companies such as FedEx, DHL or UPS. The cocaine brought into Alaska is typically packaged in kilogram quantities and later broken down by dealers into smaller quantities for retail sale. In powder form, it is normally sold in gram quantities for $100-$150 and its primary method of ingestion is by snorting. Crack dealers use a process involving powder cocaine, water, baking soda and heat to produce crack cocaine, which is then sold in small rocks for $20. The primary method of use for crack is by smoking.

Heroin is a highly addictive drug derived from morphine which is obtained from the opium poppy. It is a depressant that affects the brain’s pleasure systems and interferes with the brain’s ability to perceive pain. It can be found in a variety of forms. In a powder form it ranges in color from white to brown. Heroin also comes as a tar-like substance. Heroin is used in a variety of ways, depending on the user’s preference and the purity of the drug. Heroin can be injected into a vein or muscle, smoked in a water pipe or standard pipe, mixed into a marijuana joint or regular cigarette, inhaled as smoke through a straw, or snorted as a powder via the nose. The short term effects of heroin appear soon after a single dose and disappear after a few hours. After an injection of heroin, the user reports feeling a surge of euphoria accompanied by a warm flushing of the skin, a dry mouth, and heavy extremities. Heroin use is not isolated to the urban areas of Alaska. Undercover buys and interdiction of heroin have been reported in several smaller communities. Heroin is primarily imported into Alaska via parcels and body carries. Investigations have shown that heroin use crosses socio-economic boundaries.

You should read this before you consider moving to Alaska…

Marijuana is available throughout the state and is often viewed as a gateway drug for young adults and teenagers. The 2015 Alaska Youth Risk Behavior Survey conducted by State of Alaska Department of Health and Social Services indicates that 19.0% of high school students used marijuana within the last 30 days. Demand for Alaskan-grown marijuana continues to be high as a result of its exceptional tetrahydrocannabinol (THC) content. In November of 2014, Alaska voters passed Ballot Measure 2, an initiative to legalize recreational use of marijuana, allowing for the regulation and taxation of the drug in a manner similar to alcohol. The initiative made the use and possession of up to one ounce of marijuana legal for persons over the age of 21, beginning February 24, 2015. With the changes to Alaska Statutes regarding marijuana, SDEU does not place an emphasis on illegal marijuana enforcement. However, investigations will occur if complaints are received from the public. Frequently, investigators respond when state law and federal law are in conflict, such as transport on federally regulated commercial carriers. It is yet to be determined how the commercial manufacturing of marijuana and associated products will impact the SDEU.

Methamphetamine use continues to be an issue throughout the United States, including Alaska. Methamphetamine, also known as meth, speed, crank, crystal, and ice, produces an increase in energy and alertness and a decrease in appetite. The effects, which include an intense rush, have been reported to last up to 36 hours. It can be smoked, snorted, injected, or taken orally.

Methamphetamine labs have been discovered in recent years in single and multi-family residences in many neighborhoods. In addition to meth labs producing illegal—and often deadly—drugs, the clandestine nature of the manufacturing process and the presence of ignitable, corrosive, reactive, and toxic chemicals at the sites, have resulted in explosions, fires, toxic fumes, and irreparable damage to human health and to the environment. Homes where methamphetamine labs are present are reported to the Alaska Department of Environmental Conservation which maintains an online listing of these addresses, a link to which can be found below. Reoccupation of these properties often requires expensive remediation. 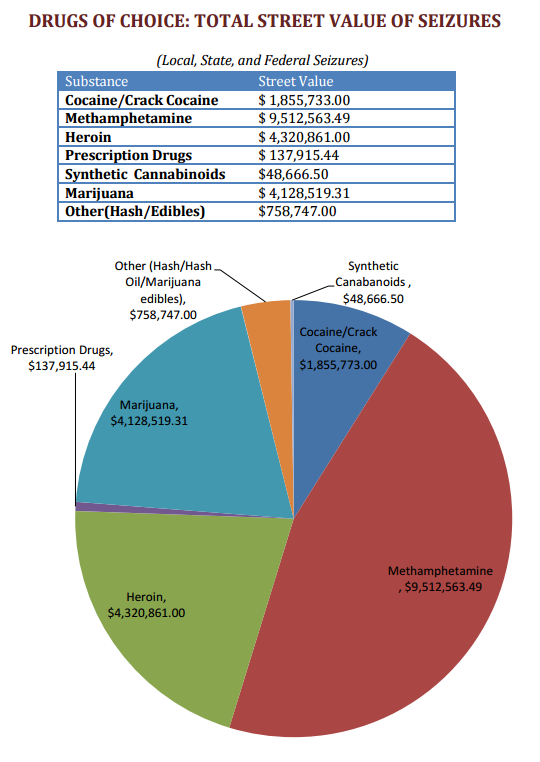 What should be done to stop the Drug and Alcohol Abuse in Alaska? Thoughts?