We all make mistakes in life.

Some of us get the opportunity to make up for the mistakes we did in the past. It takes a lot of courage and mental strength to accept your fault and ask for forgiveness.

It’s always better to take advantage of the opportunity to make things right. This would make you feel better about yourself and would help you get rid of regret and guilt.

A man back in 2002 bought Pizza for his hungry kids and paid using his check which he knew was going to bounce. He has no other option but to cheat the Pizza shop as he was broke and had no money to feed his kids.

Before the Pizza shop owners could realize that the payment by the customer was declined, he was long gone.

The contents of the letter were shocking as well as overwhelming. This letter was written by the same customer apologizing for what he did 13 years ago. He mentioned that he knew the check was going to bounce but he had no other way to buy food for his kids.

Below are the contents of the letter:

Back in 2002 I bounced a check at your pizza shop. I was going through a very difficult time financially and was at the end of my rope. I had no money and a hungry child at home, so I wrote a check that I knew would not be honored by my bank. I’m not making excuses for my behavior, just applying some context.

I think of this often and am incredibly embarrassed and ashamed at my behavior. I have visited your store several times in the last few years and have always wanted to confess and ask you to forgive me, but I have not been able to summon up the courage, so I just eat my pizza and leave.

I have worked hard and built up a solid business over the past decade and feel that it is my responsibility to remedy the situation. I hope there are no hard feelings.

I’ve enclosed a money order for $54.39. I came to this amount by assuming the original order was $20 and then adding 8% interest compounded yearly for the last 13 years.

Its never too late to apologize!

See Also: A women saves a nigerian boy who is Abandoned by his parents! Heart touching! 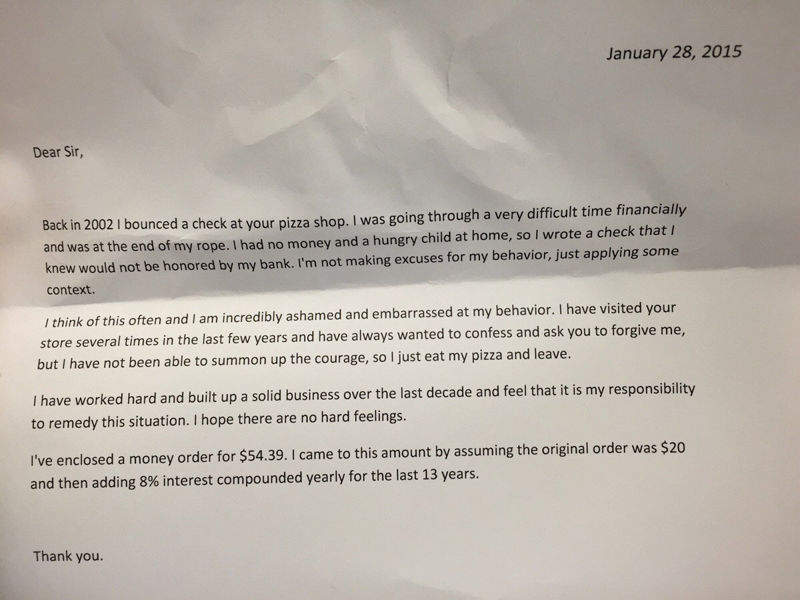